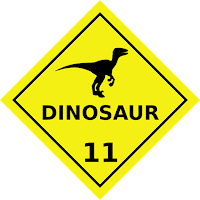 Researchers say they can reverse engineer DNA to make animals of dinosaurs. This science takes us more to my theory that God moved man into a different universe that was a testing universe after the fall. I believe that God is more showing two creations in Genesis anyway. The earth was changed by Satan to look a certain way afterword because he always changes things his way and twists reflections of Jesus.
I think though we could have been made even by an aliens changing our DNA and terraforming a planet. It is still God's hand in the end that comes over the situation. We must say though that we should look at it with God's providence. God creates all things. We should though be careful with playing God and introducing species that we make from captivity. For the sake of the earth's ecosystem we don't welcome them into the wild. If these do make a Jurassic Park, here are some guidelines for building that we must consider:

It's all Nedry's fault the choastians would say that is a very low risk assessment of someone ruining a park like that. But the big ones need really smart engineering more smart than the movies which are more controversial ways of regulating visiting the dinosaur. They would all need Several electric fences for the big one and that is really hard to feed. But it is more like really thick plexiglass/plastic walls bubble domes, like Jericho thick that are so reinforced they can't possibly get through the electric fence, even from ramming it at top speed or chewing and scratching it. These domes you take a moving rail system up and watch them from above. Or one you climb up and hike over with air vents and a open enclosure on top really high. Some of the smaller ones it is zoo protocols. No flying ones. The largest leaf eaters are really dangerous you could get stepped on. The car you came in would be crushed, they would smash It is more all them in captivity until we have it's own Jurassic world to live in but our first terraformed planets if we are stuck in our solar system without those resources so we can't make whole planets for periods of animals.

We should make zoos with one sided really thick and really high plexiglass for the big ones.

We should make international laws to not introduce them into the wild. It is more the farming ones we should be concerned with and making them really small or different size what that does to a habitat.

Buy a blanket to help veterans.

A Social Network in the making

Buy my Ebook on Amazon

Send a dollar, anything helps

Have me at Your Speaking Event

I am currently looking to speak at events in your area.
Email me the details @ MikeWilkinson767@gmail.com

Send your church donations to P.O Box 1554 Lytle, TX 78052 write it out to Mike Wilkinson Ministries or donate online at paypal link below. We appreciate your partnership in the gospel.

Send your Guest Posts, Concerns, and Prayers to MikeWilkinson767@gmail.com